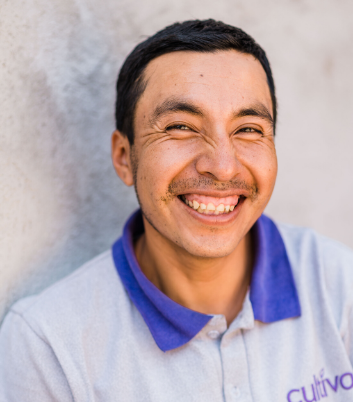 Cultiva was started in 2013 on a two-acre homestead in the town of San Jose Chacaya. Juan Pablo worked construction on the property next door. He was always very helpful and friendly, like a good neighbor. He was honest and worked hard. More than once he climbed to the top of a pine tree on the Cultiva homestead to attach a device to receive the internet. Several years later, when Cultiva was expanding the field team, Juan Pablo was a natural choice. Juan Pablo takes the lead on maintenance and construction projects. And he has become a very good gardener.

Juan Pablo is married and has three children, two daughters, and a son. His job allows him to provide better for them than he ever has in the past. He only went to a few years of school as a child. Then he was sent to a town on the other side of Guatemala where he worked at a small neighborhood store, selling drinks and snacks. Growing up only speaking the Mayan language Kaqchikel, he had to learn Spanish to work in the store.

Juan Pablo is an important member of our field team. He leads groups of volunteers to help install garden boxes at the homes of Cultiva participants. He gets along with everyone and loves to joke around. For Juan Pablo, working with Cultiva gives him a sense of satisfaction. He can take care of his family, and also give back to his own community. You can sponsor his employment with Cultiva with an annual gift of $6,000 or a monthly gift of $500. When you sponsor an employee like Juan, you’re not only supporting Juan and his family — you are supporting the hundreds of families he mentors and trains for Cultiva. Your gift will cover all of the costs associated with his annual employment — salary, benefits, and all Guatemala employment taxes and fees. You will be providing for Juan and making it possible for him to work to advance the mission of Cultiva.

People are programs. For $500 a month you can support the annual salary and all costs associated with one of our field employees. Not only will you change the life of this person and their family by giving them a great job -- you’ll be changing the lives of the hundreds of families this employee mentors and works with.Every person we hire helps advance the mission of Cultiva.

The Garden is a special group of individuals who give monthly contributions because they want every person to have: hope, food security, and the dignity to provide for their families.Garden Members want to change lives by empowering others. We teach people to  garden instead of just giving them a meal. Join The Garden today.

You’re awesome! You want to make a difference! That’s so cool and we hope we know how much we appreciate your desire to make a difference in the lives of people living in chronic poverty. At Cultiva we are committed to helping without hurting. We do that by helping people achieve independence instead of getting stuck in a cycle of dependence. Give a one-time gift of any amount today to help advance our mission of eradicating poverty.