Here’s a core belief at Cultiva: Sustainable impact happens when you understand the real need; therefore, you treat the cause and not just the symptom.

You want to give, but you want to know that your gifts make a difference, right? We believe that most people are generous and truly want to give to support and help people who were not born into the same wealth or with the same opportunities they were born into. But they also want to know that their gifts make a difference. Do you want to know one of Cultiva’s keys to success? It’s so simple when you hear it. It’s not hard to do, but it takes a lot of time and effort. Without it Cultiva would not be growing so quickly. Sometimes it’s easy to forget about it or take it for granted.

At Cultiva we know how important this is. It’s one of the reasons so many humanitarian projects fail. Many years ago, after we developed the model and philosophy for Cultiva, but before we officially launched, we got a visit from a very large organization. They advised us against doing gardens. They said they had done gardens in another part of Guatemala and within a few months they had mostly all failed. We politely listened and then followed our plan.

We knew why they had failed. How did we know? Because we had made the same mistake on our first garden box in Guatemala. We came in as “saviors,” thinking that we could give people food or give them a garden and somehow that would change their life. If only it were that easy! There was no ownership. But when people learn and earn, there’s ownership. And when we follow-up we give the support necessary for lasting change.

Giving things to people creates dependence. Once you stop giving, they are right back to where they started.

We  break that cycle and create independence.

At Cultiva we talk a lot about how it’s better to be effective than efficient. Here’s one of our core values:

Parents know what we’re talking about.

In the short run, it’d be way more efficient to do all that stuff around the house ourselves than coach and coax our kids through the process.

Have you ever tried teaching someone how to do something, and the thought comes to you that it would just be easier to do it yourself? Humanitarian work can be the same way. It’s like teaching a child how to prepare dinner. 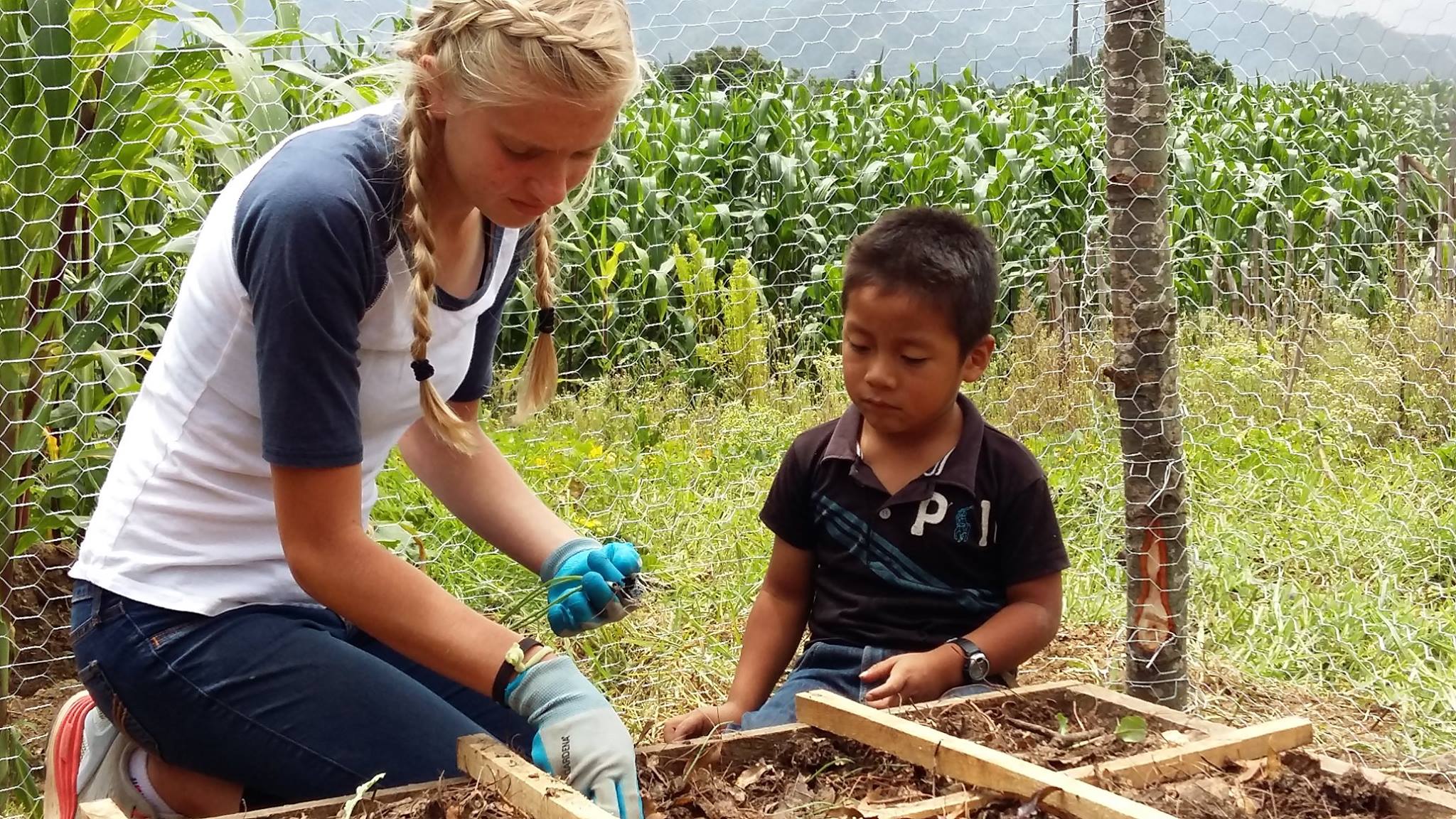 You know they need to learn how because it’s a good skill to know and it will empower them and help them build confidence. But it can be slow as they learn and make mistakes. It can be frustrating as you repeat instructions over and over again. And the dinner may not turn out very well the first time.

At Cultiva we talk a lot about how it’s better to be effective than efficient. Here’s one of our core values:

But in the long run, you know it will be best to teach the child and show them and work hand in hand with them. Because then one day they won’t need your help anymore, and they will make different dinners, and better dinners, and you may even learn from them because they have progressed so much.

This is how we work at Cultiva. We are committed to teaching people how to do it themselves. We understand the importance of someone learning how to do something on their own, and really getting the education necessary to be successful. It is slow sometimes. That’s just how it is. Because we want to do it right, and put the person ahead of any number or quota we want to hit.

By completing classes individuals and families earn their own garden box that they will install themselves with our support.

Families EARN their own garden boxes.

Well meaning people who are trying to do good humanitarian work can often do more harm than good. Internal poverty has to do with a lack of hope — a lack of a belief that you have any power to improve your own life. When we give things away and create a cycle of dependence we reinforce that belief. But it feels good to give things away! When we give things away to people in need we get a hit of dopamine and feel all warm and fuzzy about how great a person we are! When humanitarian groups ask us what they can bring to give away when they are coming to Guatemala to work with us we tell them to bring nothing. We don’t give things away. Yet when we arrive at the airport to pick up our humanitarian groups we see lots of other people carrying loads of suitcases full of things to give away. The cycle of dependence goes on and on. But we make an important distinction that Cultiva does not give things away. We don’t give garden boxes. Individuals and families earn their own garden boxes. They earn their boxes by attending Cultiva classes and working at our training center. They learn and earn.

Our humanitarian groups don’t swoop in as saviors and install garden boxes. 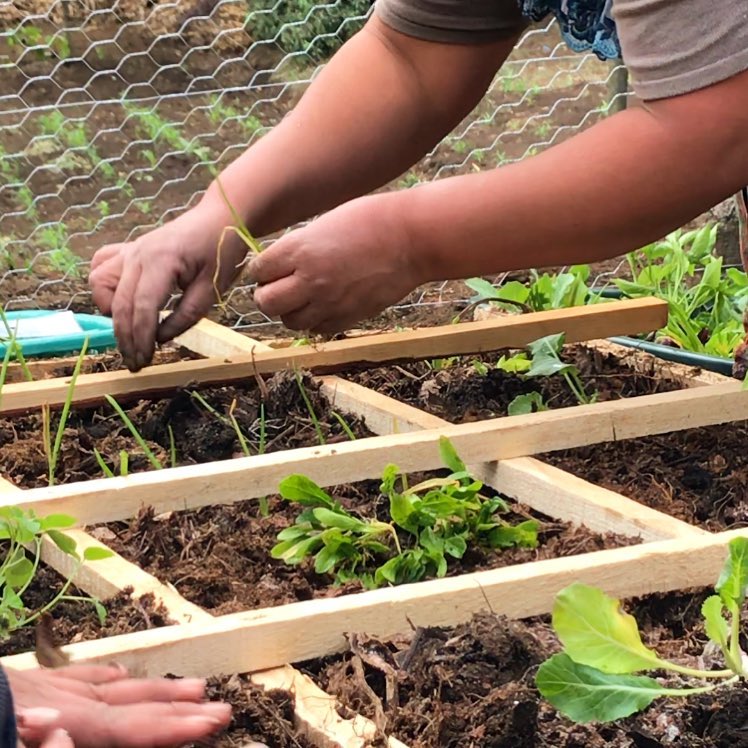 We’ve installed more than 2,000 garden boxes. We’re pretty good at putting garden boxes together. After 2,000 garden boxes, do you know how quickly we can build a garden box and fill it with soil and get the starts in the soil? We can do it pretty fast! But one of our core values at Cultiva is that we value effectiveness over efficiency. Effective > Efficient. So we could be really efficient at installing lots of garden boxes on our own. But it is more effective for us to arrive and put a power tool in a Mayan woman’s hand and help her build her own garden boxes. And doesn’t holding a power tool make you feel empowered?

Individuals and families earning their own garden box is a core part of The Cultiva Way. Learn. Earn. Follow-up.

Lasting change is not achieved in a moment. It requires lots and lots of follow-up. We’re not here today and gone tomorrow. We enter into relationship and mentor families who are trying to change their lives for the better.

When an individual or family earns their first garden box, for the next year a Cultiva Village Mentor, one of our Guatemalan field employees, will conduct monthly home visits. On these visits we can address practical concerns, like why a particular type of vegetable is not thriving in a garden. We can continue to teach about important nutrition and hygiene, and we do. More important, in these home visits we are able to come alongside the families who are actively involved in our ongoing mentoring. It’s one thing to address a fungus on a leafy vegetable. It’s another thing to put your hand on someone’s shoulder, look them in the eye, and ask, “How are you? What’s going on in your life? How can I help?”

When someone has gone through the steps of learning and then earning their garden box, we’re not done. We don’t pat ourselves on the back and move on. We’re just getting started.

Once they’ve finished, families can repeat the same class or participate in other classes, like composting, to earn additional boxes or other projects. Either way, the support keeps coming!

By replacing dependency with independence and by showing instead of doing, we promote a real cycle for change—we address the cause, not the symptom. 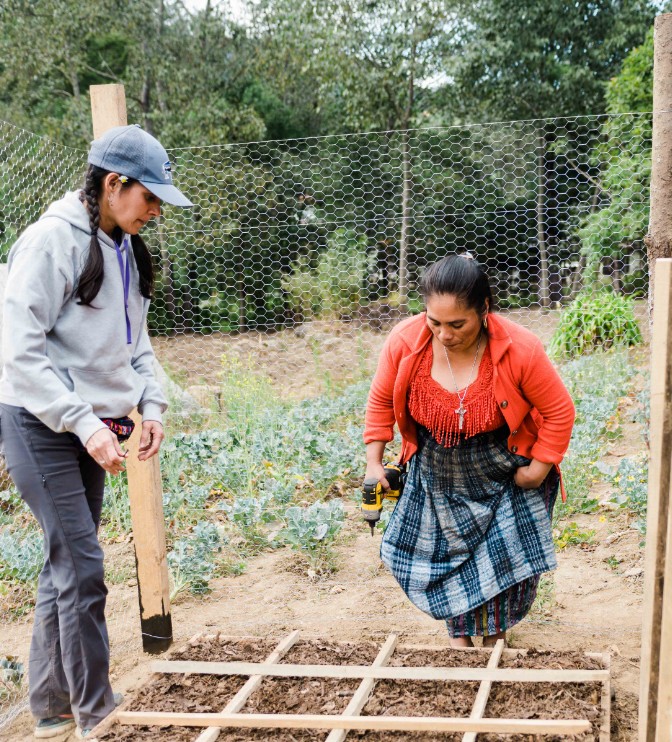