Stories of Change-Because of our Faithful Supporters 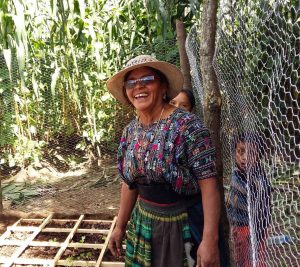 Meet Maria. She lives in a small village in the mountains of lake Atitlan called Villa Linda (literally translated to beautiful town).

She grew up with poor parents who worked hard on a farm. Maria would help her father in the coffee fields starting at the age of 4. She learned how to work hard and developed a strong work ethic.

Because her family was so poor, and they needed the help on the farm she only was able to attend a total of 4 months of full time education over the span of 2 years. Her learned work ethic and determination were valuable assets though, because she taught herself to read and write.

Maria got married at the age of 16 and had 3 children. When all of her children were in full time school (she wanted them to have more than she did), she went to find work. She studied at an infirmary to promote health and then she found work in Santiago on lake Atitlan. Because of the skills she learned as a child she understood gardening and how to be successful at it, and with her learned health skills she was able to be a respected person in the community.

Since she had gardening knowledge why did she need Cultiva? When asked why she said, “I knew about herbs and different things they were growing, but now I know how to grow them.” She could see her knowledge was incomplete and she could also see Cultiva as the place she could learn the skills.

Maria fully believes that Cultiva is a program that needs to expand, that every grandmother, mother and child should participate. “I think that if all the women and the men went through the program that we would have a countryside covered in sustainable gardens. Like they saying ‘peace forms in the family, not outside’ and Cultiva is just like that. It begins in the family.”

Maria has gone through the classes twice. She received a garden box and the tools for worm composting. She has encouraged everyone she knows to go through the program.

It is clear that this is a program she can (and does) stand behind. She wasn’t in dire need of the program but she can see how Cultiva can change the face of her community, and by extension Guatemala. Due to the respect she has within her village and the efforts she has put forward the reach of Cultiva to help is spreading. Maria is a success for everyone.

People are programs. For $500 a month you can support the annual salary and all costs associated with one of our field employees. Not only will you change the life of this person and their family by giving them a great job -- you’ll be changing the lives of the hundreds of families this employee mentors and works with.Every person we hire helps advance the mission of Cultiva.

The Garden is a special group of individuals who give monthly contributions because they want every person to have: hope, food security, and the dignity to provide for their families.Garden Members want to change lives by empowering others. We teach people to  garden instead of just giving them a meal. Join The Garden today.

You’re awesome! You want to make a difference! That’s so cool and we hope we know how much we appreciate your desire to make a difference in the lives of people living in chronic poverty. At Cultiva we are committed to helping without hurting. We do that by helping people achieve independence instead of getting stuck in a cycle of dependence. Give a one-time gift of any amount today to help advance our mission of eradicating poverty.